I preached from Zechariah 1:7-17 last Sunday. One of the applications flowed from the prayer that the Angel of the Lord prayed on behalf of the people: when praying to God, pray for that which He has already promised in His Word. Illustrating that, I mentioned that for some people prayer was motivated by a ‘Lord won’t you buy me a Mercedes Benz’ philosophy of asking for what we want instead of what God has indicated He will give. I came back to the Mercedes Benz thing a couple more times during the sermon.
When I got home Sunday night this was waiting on my front door step. 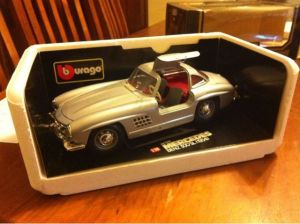 This note was attached. 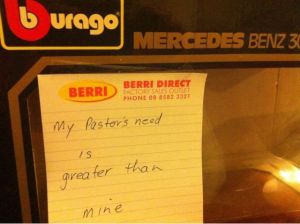 If I was inclined to the prosperity gospel I’d be tempted to think that if I had more faith God would have given me a full-size one.
I’m not.
I’m thankful for the generosity and encouragement of the people among whom I’ve been called to minister God’s Word. 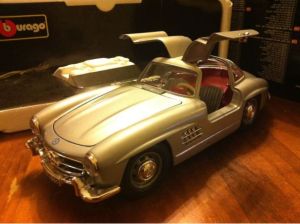 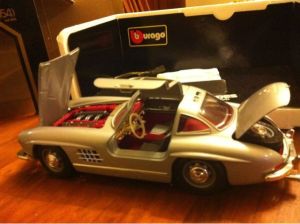 One thought on “Someone Anonmously Gave Me A Mercedes Benz 300SL”