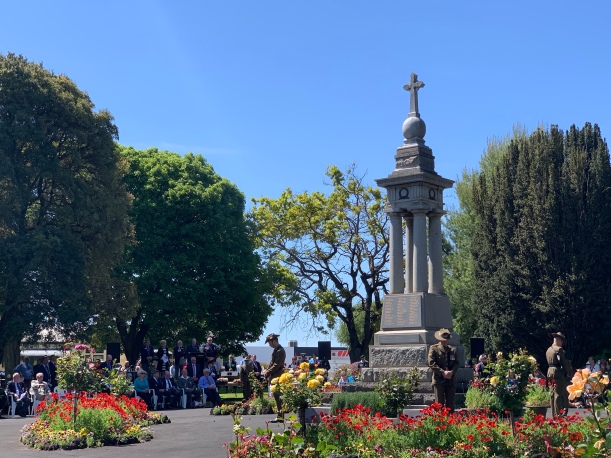 Some thoughts flowing from attendance at Remembrance Day 2015 in Mount Gambier.
Published in our local paper today.

For me, it’s the simplicity of silence at Remembrance Day that stands out. That point in our gathering where there are no voices or instruments; the only noise being the cars driving along Wehl and Commercial streets.
During that silence the mind’s eye considers: the monument established by a previous generation as their legacy of respect; the thoughtfully placed poppy flowers that surround the monument’s base; the young and old, representing so many backgrounds united in common purpose; and even the beautifully and carefully maintained grounds of Vansittart Park, the grass a carpet of green, the flowerbeds displaying manicured bursts of colour.
All of these are taken in by vision, yet, by contrast, our ears are given a rare respite from daily noise. The experience serves to relax and focus the mind.
I think it is that moment of forced inactivity in silence that best sums up that for which we’re giving thanks. It is the ultimate expression that peace has been won for us by the sacrifice and service of others. The other actions of the day are a response to that sacrifice and service, but they don’t add to it. Standing silent and still says it best for me: this is something that’s been done for us, it is something we have to receive.
That simplicity is also reflected at the heart of Christianity. It may surprise some to find out that Jesus never commended the cross to his followers as an enduring visual symbol for his followers. He told us to ‘take up our cross and follow him’, but that is our response to his call.
The two visual symbols that Jesus gave Christians were the water of baptism and the bread and wine of communion. Two very simple symbols drawn from everyday life; the water that cleanses, and the bread and wine that provide nourishment.
Like the silence of remembrance, the water and the bread and wine testify to that which is done for the Christian. It is God who makes us clean and acceptable to himself; it is God who sustains and strengthens the life of each of his people.
When we receive these elements it is an ongoing expression of the fact that everything we need has been done for us. Peace has been won, all we do is rest in it.
The silence of Remembrance Day marks a resting, but remembrance is not simply recall of past events. True remembrance looks forward and applies the lessons that history has taught and commits itself to vigilance against similar threats that might arise in future.
The sacred actions of Christianity, the water of baptism and the bread and wine of the table, also mark a resting, but our remembrance bids us look forward. We do not anticipate another victory to be won, but the enduring victory of Jesus over death to be fully expressed through all creation.

The President of Mount Gambier’s Returned Services League (Bob Sandow) read the piece below at our Remembrance Day Service today. As always, it’s a privilege to be involved.

When addressing the assemblage in Vansittart Park at the ceremony of unveiling of the Fallen Soldiers’ Monument on Sunday, 1st October, 1922, the Venerable Archdeacon Samwell explained the meaning of it’s various parts, his interpretation is given here. 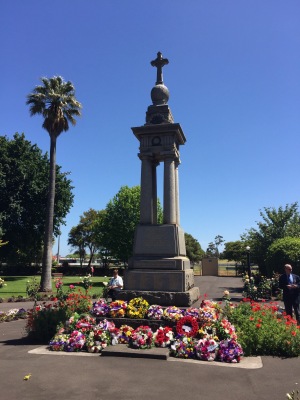 THE TABLETS form the central feature, because they record the names of those men from the town and district who fell in the Great War. It is to perpetuate their memory that the monument has been raised. At the base of that record are

THE STEPS, which stand for God, King and Country, the motive on which their action rests.

THE FOUR PILLARS are raised above the record of their names, signifying the great principles they died to uphold, viz.(1) Righteousness; (2) Justice; (3) Freedom; and (4) Peace

The pillars are protected and bound together by
A CANOPY, which bears the emblem of the A.I.F. (commonly known as the Rising Sun). This expresses the determination of Australia to maintain the four principles inculcated by the pillars.

On the canopy rests
A GLOBE representing the World. This teaches that while the judgements of the nations comprising the world are firmly poised on the four great principles before mentioned, humankind will dwell together in security and well-being.

But there is a greater ideal in life than that suggested by these prudential considerations. That ideal is the highest point to which human nature is capable of attaining and therefore it is placed above the Globe, and forms the apex of the monument
It is
THE CROSS – The symbol of self-sacrifice. Christ-like they died that we might live “Greater love hath no man than this, that a man lay down his life for his friends.”

Thus understood, the Monument will stand in that beautiful garden as a perpetual witness to the bravery of the men in honour of whom it is erected, and also of the great principles for which they fought and died.
May it remain there sacred and inviolate, and may its lofty ideals be transmitted pure and unsullied, from generation to generation.