A couple of recent posts from Bondia Timor Leste about the Evangelical Presbyterian Church of Timor Leste are both worth noting.
The first has to do with the purchase of a block of land for a church building in Dili.
Their situation:

For two and a half years the Dili congregation has met under a thin blue tarpaulin in the driveway of one of the homes of a church member. Under the tropical sun the tarp just slows the light a little, while casting a blue light over the congregation who are perspiring under the heat which radiates through. During the Wet season the gravel driveway underneath becomes a torrent of water, and even sends the wandering hens and pigs off to find better shelter.

Local negotiations over price with the local landholder, his family and his village were fairly straight forward, but then the whole process had to wait in a processing queue in government departments for two years while they tried to cope with their overwhelming backlog of land rights issues. 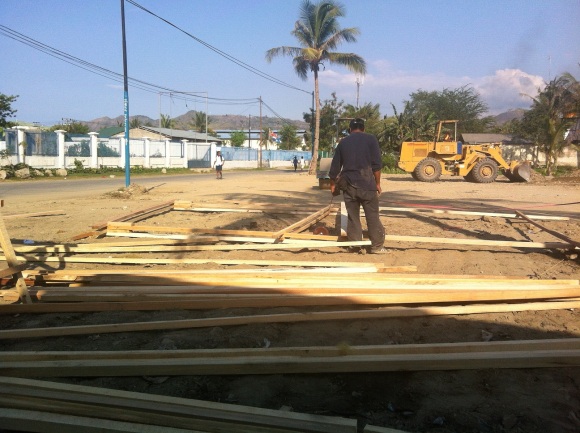 This is the land for the church and the beginnings of a fence (a very important part of securing ownership).
Read the whole post here.

Three people from Sydney will visit Timor Leste between 1-8 December to share in a training ministry with the local church.

With local coordination from Daniel Marcal, we will run a training programme for 16 evangelists and nine pastors at Licquica west of Dili. The training will be focussed on the core skill of preparing and giving a Bible talk. In addition, there will be a session on cults and time for a synod meeting. Wilson Fernandes will arrive early to spend a weekend with the church in Dili and David Burke will have some consultations on behalf of APWM and PresAid before he departs for Singapore.

The team members are as follows: